This article was snagged from CrossFit Journal, but we want it to live on our site as well. Angie is not only a 20 Mile Fitness Collective Co-Owner and Coach, she is also one of the most incredible humans you will ever meet. Her upbeat personality and positive attitude are something we should all aspire to. Her story is no short of a miracle and is an incredible testimony to us all—all things are truly possible. We are so thankful to have Angie as part of our community. 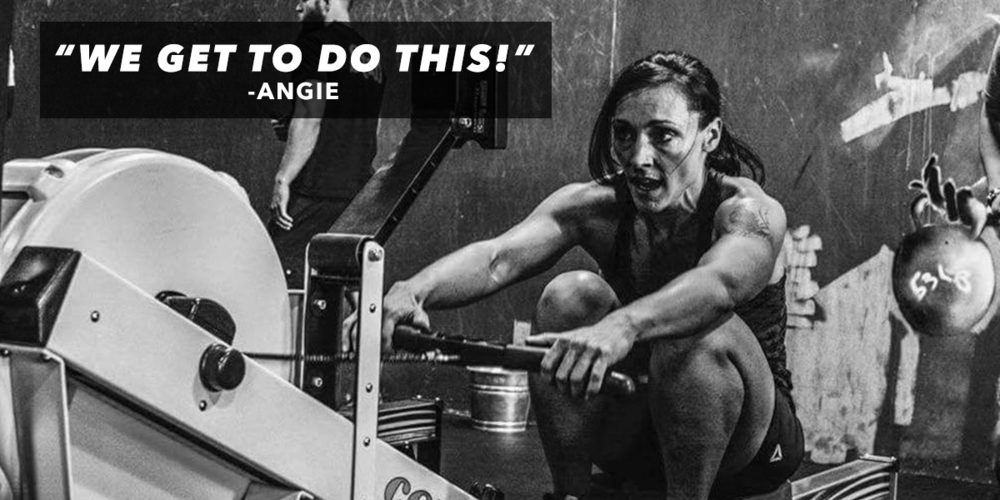 Witnesses told Angie Rodriguez she had been run over not once but three times.

On March 20, 2016, Rodriguez was walking across the street in Colorado Springs, Colorado. The next thing she remembers is being dragged along the road under a low-profile Mercedes car before the drunk driver sped off.

Angie Rodriguez sustained a host of injuries in the accident and has had nine subsequent surgeries to repair the damage.

After the initial impact, the driver crushed Rodriguez a second time as she backed up to see what she had hit. She ran Rodriguez over a third time when she drove forward again and took off, explained Rodriguez, a coach at 20 Mile CrossFit in Parker, Colorado.

“I don’t remember the first two times, but I remember the third time. And I remember thinking, ‘Not today. Please, not today. My girls need me,’” said Rodriguez, now 41, referring to her two young daughters.

Then she felt a surge of pain in her hip.

“I thought my hip was my only injury at the time. I thought I could just get up and walk away,” she said.

At the hospital, Rodriguez learned her injuries extended well beyond just a dislocated hip.

Rodriguez in the hospital with her two daughters and a friend's child. 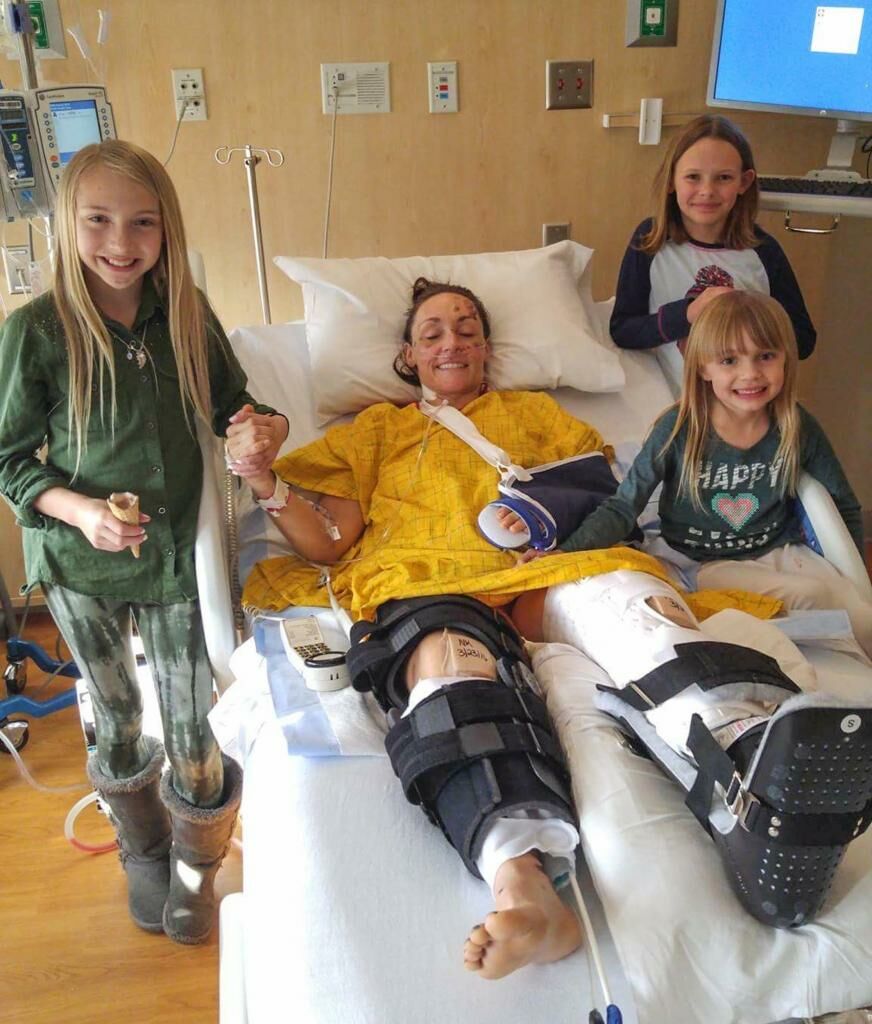 She had seven broken ribs, a lacerated liver and a collapsed lung. She had fractures in her L1, L2 and L3 vertebrae, and she had sustained a compound fracture—and subsequent nerve damage—of her left humerus. She had a compound dislocation and severed ligaments and tendons in her left ankle, where she also had a gaping wound. She had also torn the medial collateral ligament and meniscus in both knees, as well as the anterior cruciate ligament in her left knee. Finally, she had a fractured scapula and a separated acromioclavicular joint.

Since the accident, Rodriguez has undergone 10 surgeries to repair the damage to her body. Surgery in March involved a total hip replacement, and in September she went under the knife for ACL and meniscus repair in her right knee. Surgeons will address her hip in March 2018 and her other knee in May. Today, Rodriguez knows she’s incredibly lucky to be alive, and she’s thankful she’s on her way to a full recovery.

“I haven’t had a lot of anger. I was just so relieved I was still alive and didn’t have any permanent damage like a spinal-cord injury," she said.

Her doctors told her she survived only due to the fitness she earned over four years of CrossFit prior to the accident, she added.

“While I was in the hospital for 10 weeks recovering, every single one of my doctors and surgeons said if I wasn't in the shape I was in, I would have died,” she said. “To be strong and fit is one thing, but to have fitness that can literally save your life is another thing. And I don’t think there's any way I would have had that kind of fitness without CrossFit." 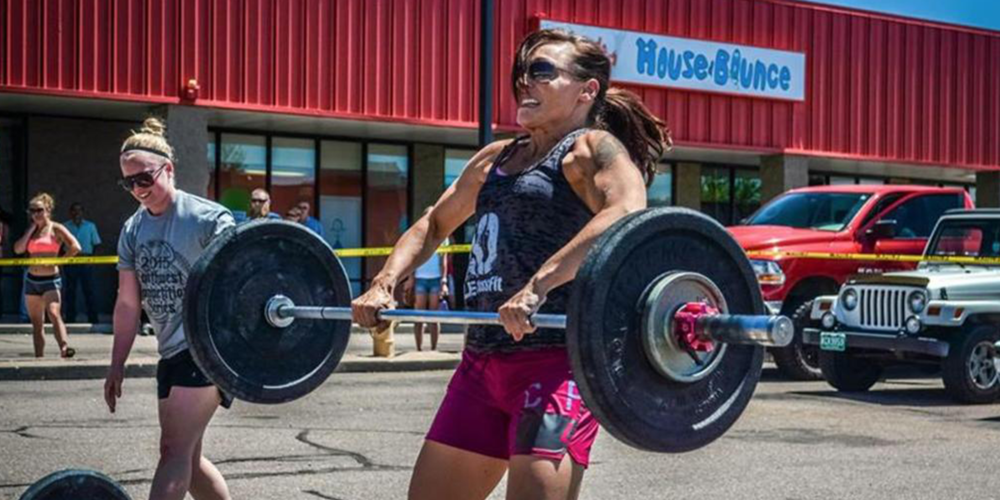 After the accident, the community at 20 Mile CrossFit rallied around Rodriguez and her children.

Beyond the physical, Rodriguez explained her gym community has helped her stay positive through her long recovery.

First, the 20 Mile CrossFit community organized a meal train for Rodriguez and her family.

“From March until July, people brought meals to my house at least four days a week,” Rodriguez said. They also helped out by picking her kids up from school when she couldn’t drive, she added.

“It has made it really hard to feel sorry for myself when I have been the recipient of so much love and encouragement.”

The gym also hosted a fundraiser that raised US$7,600 to help with Rodriguez’s rising medical costs and lost wages. At the time of writing in spring 2017, she had paid $10,000 out of pocket, only a fraction of her total unpaid medical bill, which stood at US$108,000 because the 26-year-old drunk driver who ran her over wasn’t insured, Rodriguez explained.

The driver was eventually charged with vehicular assault resulting in serious injury, driving under the influence and leaving the scene of an accident. She was later sentenced to 100 hours of community service, 60 days of work-release jail time, four years of supervised probation and restitution of $150,000.

"I testified at her court hearing that I didn’t think she should go to jail. Being in prison sitting there does her no good or me. I did support her doing community service, though, because then I at least know some good can come out of it. She didn't have any prior convictions, and I didn’t want to ruin her life over one bad decision,” she said.

She added: “I still feel like I did the merciful thing, and I’m glad I did. It has allowed me to teach my daughters about forgiveness, perseverance and hope. It’s one thing to talk about what those qualities are, but for them to experience it through what I went through is much more powerful. Considering what they've gained from watching me, I almost wouldn’t take the (accident) back. Almost."

“She has used this accident as an opportunity to teach her daughters, and me, about grace for the driver (who hit her),” Jorgenson said. “And she is the example of what a real CrossFit athlete is to me. (CrossFit) Games athletes are obviously incredible, but Angie is the manifestation of what it looks like to fight to be strong, to encounter hardship and to embrace it to become better.”

Before the accident, Rodriguez had done CrossFit for four years.

Despite Rodriguez’s choice of forgiveness over anger and her decision to dedicate hours each week to her rehabilitation and fitness, she admitted her recovery hasn’t been as easy as it might look.

"Coming back to the gym and then having another surgery, and then coming back again over and over has been frustrating for sure. Your brain says, ‘You can do it,’ but your body is like, ‘Not yet,’” she said. ”I'm obviously not at a full recovery yet, but I’m going to come back even stronger than I was before.”

And she wouldn’t be where she is today—physically and emotionally—if not for CrossFit and the people she sweats with each day, she explained.

“The CrossFit community—we really know how to pull together for each other. We do it in the workout and we do it in life."

She added: "CrossFit saved my life, I truly believe that, and it keeps saving me—the people keep saving me—in little ways every day.” 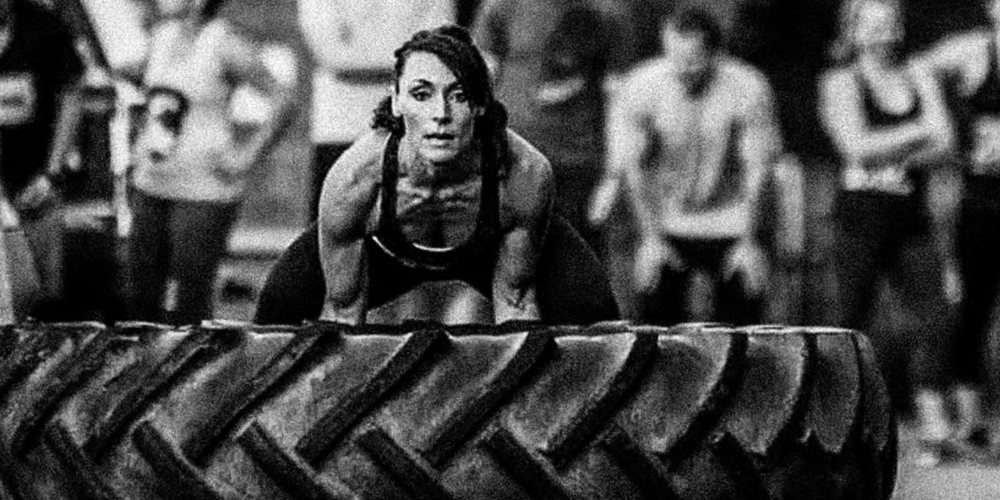 About the Author: Emily Beers is a CrossFit Journal contributor and coach at CrossFit Vancouver. She finished 37th at the 2014 Reebok CrossFit Games.

All images: Courtesy of Angie Rodriguez

Previous We GET TO Do This with Angie Rodriguez
Next Transformation Story: Joni